Have you been to Iowa?

I saw this posted on Facebook the other day, a quote from physicist Richard Feynman: I'd rather have questions that can't be answered than answers that can't be questioned.  I'm with him.

I mention it because I'm about to say some of those things that sounds like I'm questioning things some people don't think should be questioned.  I am.  I just want to be up front about it and invite you to follow where I wonder for minute.

I think that Jesus' death was a sacrifice for the kingdom he showed was possible here on earth, one of love and compassion, peace and non-violence.  There isn't room here for a debate on atonement theory - the understanding that Jesus' death somehow atones for the sin (original and accumulated) of us all - and this short piece isn't about that, anyway.  But I will say that I wonder, sometimes, that we might believe in a God of love, who's grace is for all, and, at the same time, insist that God requires a sacrifice to atone for sin.  Forgiveness, freely given, requires acceptance, not sacrifice.  I wonder, too, how we can say that we're made in the image of God, as it says in Genesis, but then say that we are tarnished with an "original sin," even from our birth, from our very creation.

I start with those things because they inform my understanding of the Lord's Prayer, especially the phrase "your kingdom come, your will be done on earth, as it is in heaven."  This kingdom isn't in the next life or the kingdom promised with Jesus' return or the New Jerusalem of Revelation.  It's now.  It's the kingdom Jesus lived, the kingdom he spoke of when "began to preach 'repent, the kingdom of heaven has come near'" (Matt. 4:17).  Not will come, but has come.  It's here.

God's will is expressed in the life of Jesus, the teaching and the action.  We hear the stories every week, we remind ourselves that Jesus is in each of us, that we can be "Christ-like," even that we are created in the image of God.  We talk well and we praise God and honour Jesus.  But to bring the kingdom of heaven to earth requires more than that, it requires our participation with Jesus.  We must live into the kingdom.  It's here.

Perhaps one of the difficulties we have is the very language Jesus uses, speaking of the kingdom, of God's will, language that sounds hierarchical and about the power of God over us, rather than with us and in us.  But that is where God is, among us in Jesus, within us and in creation around us.  What's needed is our participation, our engagement of it.  We pray "on earth, as it is in heaven" as if God - and all the love and grace that is God - is something that belongs in heaven and is somehow foreign to earth, as if it needs to come in here from outside somewhere.  But it is here.

There's a wonderful moment in the movie 'Field of Dreams,' based on the classic book 'Shoeless Joe' by WP Kinsella, when Ray, who heard a voice tell him to plow under part of his farm and build a baseball field so that long dead players could play there, meets his long dead father as a young player on the diamond.  His dad asks, "is this heaven?" and Ray answers "it's Iowa."  His dad ponders that and says "I could have sworn it was heaven."  "Is there a heaven?" Ray asks and his dad says, with certainty, "oh yeah, it's where dreams come true."  Ray looks around at his family and home that he loves, and the baseball diamond that has brought him healing with this father, grace, peace and contentment and, finally, wholeness in his life, and he says "maybe this is heaven."

That, ultimately, is God's "will" for us, I believe: love, grace, peace, contentment, wholeness of body and spirit, a place that's home and an understanding of our own place in the family of creation.  The life Jesus leads us to is the journey there.  Here, on earth, as in heaven.
Posted by RevRob at 19:58 1 comment:

I don't remember exactly when it was that I knew The Lord's Prayer. 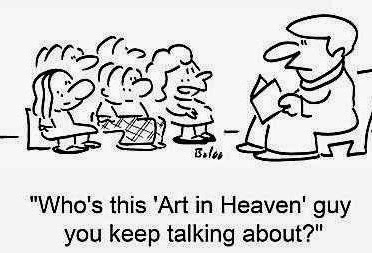 I don't mean memorized it and could repeat it.  Back in the day, that was pretty much the first thing you learned in Sunday School.  I'm pretty sure I could recite it from memory when I was five or six.  With some interesting pronunciation, probably.  Words like "hallowed," "forgive," "trespasses" and "temptation" are a challenge for a little person to get their tongue around.  Seems ironic that those are also the words that adults often have trouble with understanding.  The meaning, at least.

Anyway, that was a long time ago.  These days less people seem to know the words from memory.  That may not always be such a bad thing: new things can be fresh.  And there's newer translations that might be better to understand than the old thees, thous and thines.

And that's the thing about The Lord's Prayer: the balance between what it means to us as a piece of our ritual heritage and what it has to say to us.

For many, the meaning of the prayer isn't just the words, but the connection to our sense of community.  We all say it together.  It's the one thing so many know together, that's common to different traditions and denominations.

I love that community aspect of it.  And to me, it's like a treasured hymn or song that we all know, but we might know slightly different words or variations of the tune.  We can still share in it all together and have our own distinctiveness.  You, instead of thy, or maybe even mother or parent, instead of father.  Some people, I hear, even like to throw in a "please" when it comes to giving us our daily bread.

For Lent this year, I'm reflecting on The Lord's Prayer.  What's in it, what it might mean to us and why it's so important to know it, not just recite it.  So let's start right there: how The Lord's Prayer is both personal and communal.

There are two biblical sources for The Lord's Prayer (and one other - The Didache, or The Teaching of the Twelve Apostles - a catechism or handbook for the earliest Christians), both of which have Jesus telling the disciples to "pray like this."  In Luke, a disciple asks Jesus to teach them to pray, but in Matthew (which is the more familiar words), praying like this comes in the context of talking about how not to pray.  Not like the hypocrites who show off, but don't mean it.  God knows what's in your heart, so pray privately.  And not like those who are too wordy, God knows what you need.  Pray like this "Our Father in heaven …"

God knows.  God knows already because our relationship with God is personal and intimate, like a father or mother.  But our God is the God of all.  We are all children of God and what is true in a family is that we are all intimately connected, but all communally connected also.

Jesus would have begun the prayer with "abba" in aramaic, meaning "dad," the familiar of father, not just to reflect his relationship, but ours, too.  And to Jesus, abba in heaven would not have been distant, but near, the heaven which is at hand.  Far from praying to a distant deity, Jesus invites us to pray with an intimacy to God who is with us.  Us.  All of us.