The last two verses of chapter 20 of the Gospel of John sure sound like an ending to me.  "Now Jesus did many other signs in the presence of his disciples, which are not written in this book.  But these are written so that you may come to believe that Jesus is the Messiah, the Son of God, and that through believing you may have life in his name."

Chapter 20 includes the story of the empty tomb, the appearance of Jesus to the disciples and the story of Thomas, the one who doubted.  In the middle of this chapter is a commissioning scene: "'As the Father has sent me, so I send you.'  When he had said this, he breathed on them and said to them, 'Receive the Holy Spirit.  If you forgive the sins of any, they are forgiven them; if you retain the sins of any, they are retained.'"

Sure, there's debate about how it was added and who might have added it, but it's there and it seems to be there in the oldest sources.  I don't have an answer for that debate - any more than anyone else has anything really conclusive, I don't suppose - but I like this chapter 21 and I'll tell you why.

Jesus gathered ordinary people to be his closest followers.  And for awhile they followed and learned and experienced life with Jesus.  Then it all came to an end.  When Jesus was arrested, one of them even denied knowing him.  The others all hid in fear.  When he died, they didn't really know what to do.  And then he was there again with them.  Even reappearing for the one who was missing the first time, in order to prove it was really him.  He was there!

Amazing!  Incredible!  A fulfillment of what he had foretold, proof that he was who he had said he was!  And then he breathes the Spirit into them and tells them he is sending them into the world, just as God sent him to us!  Fantastic!  And then what do the disciples do next?  They go fishing.

In chapter 21, the six of them that had been fishermen went fishing.  They went back to their everyday, ordinary former lives.  Like, the show's over, we're done with that.  It was great while it lasted - well, mostly, except that last bit with the death and everything - but Jesus is gone now, so let's all get back to where we were.  It's over now. 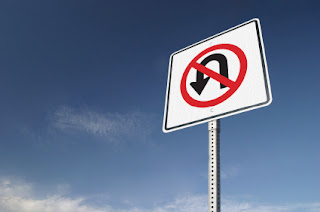 Makes me wonder if that isn't how we should end every Sunday morning church service.  Well, every church service, every church meeting, every church gathering, every "church."  Period.  Isn't the whole point of church to be remembering that it's not over?  If we go to church for an hour, enjoy the show (or at least tolerate it) and leave God behind as we leave the building, how are we accomplishing what Jesus teaches us?  Church is just the beginning, too.

It can't just be inspiring or refreshing, entertaining or momentarily meaningful, it must also be demanding.  In the same way that Jesus demands it of the disciples, Jesus demands it of us: it's not over, it's just beginning.  "Follow me."
Posted by RevRob at 22:48 No comments: