In the Bible, there's a tiny little book near the end of the minor prophets section of the Hebrew Scriptures (the Old Testament), only a couple of chapters.  It doesn't get dusted off very often.  It's the book of the prophet Haggai.

If you're not familiar with it, it's not surprising.  If he's lucky, Haggai gets read in church once every three years - this year on November 10.  Maybe you could do Haggai a little favour and go read his book.  The whole thing might take you four minutes.  Then someone might remember him.

It's too bad,  too, because Haggai says a couple of really smart things.  Maybe they're things we hear elsewhere, but Haggai has some context worth remembering.  He was writing about 520 BCE.  That's about sixty-six years after the Babylonians conquered Jerusalem and destroyed the Temple, sending many of the citizens of Jerusalem off to live in Babylon (referred to as The Exile), and eighteen years after Cyrus and the Persians conquered Babylon and sent the exiles back to Jerusalem and authorized the rebuilding of the Temple.
But the rebuilding was not going well.  The remnant who had remained behind and protected the ruined Temple and the returning exiles didn't exactly see eye to eye, there was conflict with the Samaritans and there were a variety of other "interferences."  So, while homes and business got built, the Temple kind of sat and waited.

So.  Here's Haggai.  He reminds all the Hebrews that God is with them.  "My spirit abides among you; do not fear," God says through Haggai (Haggai 2:5).  And he inspires them with the hope that God has promised them a great future.  This new house may not look like much, especially compared to the old one, but it will be : "The latter splendour of this house shall be greater than the former, says the Lord of hosts; and in this place I will give prosperity, says the Lord of hosts."  (Haggai 2:9.)

But is Haggai really talking about the Temple or about the people?  That remnant that was left behind protected the foundation, those that returned had a vision to build anew, together with God they can make something greater.  But they had to work together.  And in that, more than a Temple is built.

It's a thought, perhaps, to hold on to around Remembrance Day.  In remembering, we do not celebrate or glorify, but honour and respect.  We re-member, or reconnect, not, perhaps, with a personal experience, but with the awareness that what was sacrificed on all sides in conflict brought us the freedom and opportunity to create new. 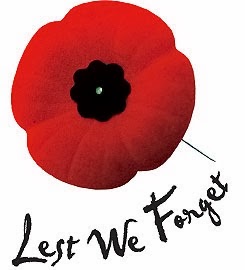 "Lest we forget" isn't just a call to remember the past, but to honour it by living into the prosperity of the future as best we are able.  In Kohima, in northern India where it borders Myanmar (formerly Burma), there is a memorial to a decisive 1944 battle.  On it are these words attributed to John Maxwell Edmonds: When you go home, Tell them of us and say, For their tomorrow, We gave our today.