The End is Near-ish 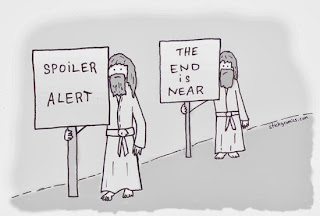 I wanted to begin with a little joke, like "the end is near - again!"  It's that time of year,   not the calendar year (a little early for that), but the church year.  The advent season is coming soon, and that begins the church year with the anticipation of the coming of Jesus.  So, these last few weeks before that, as we come to The End, we hear scripture readings in church that remind us of, well, The End.

Luke tells the story of the disciples admiring the impressive beauty of the Temple, only to be interrupted by Jesus prophesying that it will one day be rumble (Luke 21:5-19).  Furthermore, there will be false prophets and doom and destruction and they'll be hated, attacked and persecuted and killed.

You can just imagine the disciples saying "wow, Jesus, thanks for the encouragement."

But there's more, Jesus says: "not a hair of your head will perish. By your endurance you will gain your souls" (Luke 21:19).

"Well then," the disciples might say, "that's okay then."

No, they probably wouldn't.  Not if they're anything like us.  And I think they are, that's why Jesus picked them.

We find it so easy to focus on the trials and tribulations of the getting to The End.  And why wouldn't we?  We're surrounded by them.
We don't need to imagine war or famine, floods, earthquakes, hurricanes, tornadoes, tsunamis or typhoons.  We can watch them on television, presuming that we are among the lucky ones not to be experiencing them in person.  Also thanks to television - and movies, too - we do imagine seven-headed dragons, horsemen of the apocalypse, great beasts and other computer-generated creatures.  We seem to be good at the destruction part.  Almost a little too comfortable with it, with coming to The End.

Maybe "comfortable" is the wrong word, maybe "familiar" is better.  Either way, I guess I'm wondering how we got to be so familiar with cataclysmic endings and not wondrous beginnings?  Every end is followed by a new beginning, how do we then find it so hard to imagine The Ultimate New Beginning?  We can certainly imagine The Ultimate End.

This "new thing" God promises will come after The End, we don't know it like we know the other.  We have hints and we have imaginings, but we have only the language and experiences that we've had to guide us and those are simply not enough.  This is something new.  This needs - demands - hope.  Not wishful thinking, but certain hope.

Perhaps hearing about The End and then experiencing the anticipation of Advent and the new beginning of Christmas is good practice.  What will the new beginning be like?  Wait and see.
Posted by RevRob at 07:08 2 comments: