We have five signs outside our church right now.  It might seem like we got a little carried away because that’s a lot of signage, but it’s all important.  Each has a message and a purpose.

It can be a little too easy, though, to get so used to them being there that one doesn’t really pay as much attention to them as one should.  It’s good to have reminders.

Take our main sign, for example.  It has the name of the church permanently on the top and then a space where you can change the letters to make different announcements, like what’s happening that week or a special event.  Because I’m on sabbatical right now, I don’t decide what’s on it, so I look to see what it says.  Reminds me to look at the other part, too, the part that has the congregation’s mission: living God’s love, sharing God’s love.

That’s the official “statement,” but the other signs say a little bit more about how we’d like to be doing that.

Like the rough, hand painted one I’ve talked about before that says “WE’LL TAKE ANYONE.”  That’s a tough calling to live up to and I’ve no doubt there’s been, and will be, some challenges with that.  But we mean it.  For awhile we even had a smaller sign inside that said just that, “and we mean it,” just to remind everyone.

But every now and then there’s a little reminder to look at it again when I hear people comment that we can’t possibly mean “anyone,” because, well, what if the wrong people got in?  You know, “those” people.

I’m not always sure who “those” people are (though it’s made pretty clear - and specific - sometimes), but perhaps the sign isn’t precise enough.  Perhaps it should read “we’ll take anyone - because Jesus would.”  Jesus didn’t just welcome “sinners” and “enemies” - prostitutes, tax collectors, Romans, Samaritans, lepers, the poor, the hurting, the angry and every kind of marginalized person - he actively sought them out.  There’s no such thing as “those” people if you desire to live and share God’s love.

That’s not say it isn’t challenging.  Or that we, or anyone else, is good at it.  Jesus doesn’t call people to perfection, Jesus calls people to love.  And love is messy and challenging.  So we try. 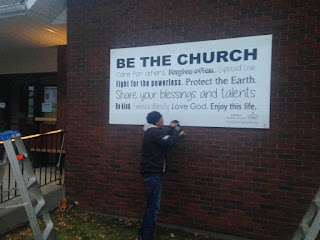 There’s a third sign, next to the front door, that we put up at the time of the Angels Among Us campaign.  It says some of the ways we try to love.  Some of it’s new, some of it’s borrowed, but it’s all true.  It reads “BE THE CHURCH.  Care for others.  Forgive often.  Spread Love.  Fight for the powerless.  Protect the earth.  Share your blessings and talents.  Be kind.  Embrace diversity.  Love God.  Enjoy this life.”

Being the church isn’t about the building or Sundays at 11, it’s about these things.  And again, no one’s claiming perfection or even success at doing them, but rather the aspiration that doing them would be living God’s love and sharing God’s love.

Maybe it might inspire people to “spread your wings and love.”  That’s the phrase someone wisely added to the bottom of the temporary sign on the lawn that promoted our Angels Among Us campaign in November.  It used to be surrounded by over one hundred stakes with “angels” and their stories on them and soon, it, too, will be put away until next year.  But that was the goal of the campaign, to encourage people in the community to recognize those who spread their wings, living and sharing love.

Now, I said five signs, and if you’ve been by the church lately, you’re probably wondering where the fifth sign is.  It’s the hardest to see because it’s not words, it’s action.  It’s not posted on a board, it’s everywhere.  And by everywhere, I mean it’s not just inside or outside a building on a given day at a given time, it’s people going out into the world and actually doing what those other signs say.

We have a place to gather so that we can take what we share there out into the world.  We have words to teach and inspire so that love and grace and wonder won’t just sit in a pew, but live in people’s lives and be shared with everyone.  Look.  The signs are all around you.
Posted by RevRob at 20:12 1 comment: