I was standing in the church kitchen when I saw the stars.   They were just there, on the wall by a back door.  One silver and one gold.  I wasn't really sure why they were there, except that it was Epiphany and I knew Fern was going with "what's epiphany?" for a theme, it said so on the sign.

I should explain that I wasn't at my church on Sunday.  Fern did the service and the sign out front said "What's Epiphany?" so I assume since January 6 is Epiphany, she meant "the" Epiphany not just any old epiphany.  Although … hold that thought, I'm having an epiphany.  I'll come back to that.

I'm on a sabbatical leave for the next three months.  In the United Church, a minister has an opportunity, after five years of ministry, to step away from the regular week to week church work in order to work on something different, for which you wouldn't normally have time.  The idea is that it be time to refresh and renew, be creative and inspired, and bring that back to your ministry at the end of it.  I'll be doing some work around children's stories and learning resources.  But I'm getting away from my point here a bit, so ask me about it sometime.

So, the stars.  I looked around and there was another one over the office door.  And then there's the three really nice big ones we put up at the front at Christmas time.  Stars everywhere, it seems.

Yes there are.  And there were, too.

In the wonderful Christmas story we tell, the magi arrive at the stable with their gifts of gold, frankincense and myrrh, having followed a bright new star from distant lands.  Except: they wouldn't have arrived at the manger, would they?  The star had to appear, they had to interpret the sign, get things together and travel.  Then they stop to see Herod and move on.  That's going to take some time.  Matthew (in whose gospel we find this part of the story) even says "and there, ahead of them, went the star that they had seen at its rising, until it stopped over the place where the child was.  When they saw that the star had stopped, they were overwhelmed with joy.  On entering the house, they saw the child with Mary his mother; and they knelt down and paid him homage" (Matt. 2:9-11).

So, okay, the magi were a little late to the party. They still get the job done, though: Jesus is revealed (it's an epiphany!) as the promised one, the messiah.  And they brought gifts to acknowledge a king.  But, wait a minute, what about that mobile star?

The way Matthew tells it, the star moved.  The magi didn't just navigate their way to it, the star led them.  It went ahead of them and "stopped over the place where the child was."  That's a pretty amazing star.  And, even more amazing still, only the magi seemed to be aware of it.

Surely, if everyone could see it, at some point Herod or his people would have gone "hey, what's that in the sky?  And why is it moving this way?"

So maybe the magi could see it because they were looking.  Just as the angels in Luke's story appeared to the shepherds, the lowest of status in society, maybe the star appeared to the magi because they were already seeking it.  Matthew doesn't suggest that it was the biggest star, just that the magi "observed his star at its rising."  They noticed it, it got their attention and it meant something to them.  And they followed this sign to Jesus.

Look around you.  The sky is full of stars. 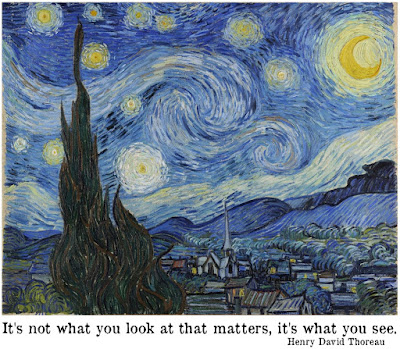