How well do you know the Ten Commandments?

I mean the actual Ten Commandments in Exodus 20 of the Bible, of course, not the classic 1956 Cecil B. DeMille film that made Charleton Heston a star.  Worth watching, though, if you have three hours and thirty-nine minutes to spare.  Of which about ten minutes is actually the story of Moses receiving the Commandments and how he then "shares" them with the Israelites. 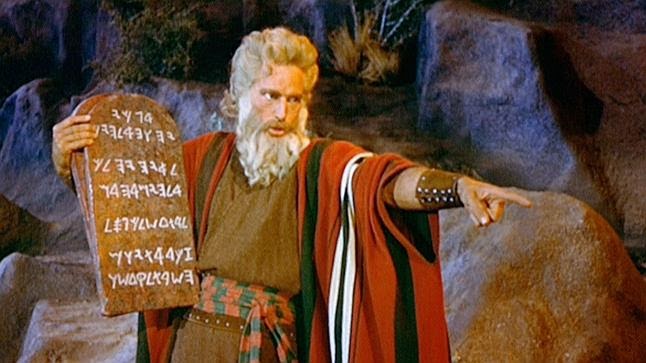 It might seem like I digress, but I don't think I do.  That's still, I think, the big problem we have with the Ten Commandments: my original question, how well do you know them?

Maybe you memorized them in Sunday School, like I did back in the day.  Maybe you can recite them from memory.  And please don't stop me on the street and test me - I have a feeling that I might not do very well.

But just because I can't recite them exactly doesn't mean that I don't know them.   Maybe that's why the movie's only peripherally about them.  The movie's about the bigger story of which they're a part.

I know human beings wrote them down, and I believe they intended to make them clearly understood, but I'm just wondering why God would want to address how we live together by telling us what shouldn't be and what not to do.  If God thought we needed a little help, a few guidelines, a little direction to steer a fractured and broken community in the direction of living together and living well as God intended, then I'm having a little trouble thinking that God would frame that as what you shouldn't do - or else you'll be punished.

As a society, most of our laws and rules tend to be designed to tell you what you can't do or what you have to do because otherwise something bad will happen.  And if you don’t follow the law … there’s punishment.

That’s a whole load of negativity for a God of hope and promise.  The God who heard the cries of people in bondage and sought to free them for a better life.

Suppose we were to look at laws and rules as a means to living better.  Not so much a means of controlling society as a means to encourage living well, living whole and living with each other with respect and compassion and love.  That would be good wouldn’t it?

This week, many Christians – of all denominations – will be hearing the story in Exodus about Moses receiving the ten commandments from God on Mount Sinai.  Many will also be celebrating World Communion Sunday, a day to recognize that, in the rite of communion (or eucharist, the sacrament that is central to Christianity), Christians all over the world are part of the same tradition.  Maybe this is a great opportunity to wonder about how we might come closer together through what we do, not what we don't.  Think of the respect and appreciation for each other we might have, the love, compassion and understanding that might result if we all got to know each other a little better because we lived well together.  Not because of fear of punishment for doing wrong, but by doing right because of possibilities for a better world.

We could start by being a little proactive about some of those commandments.  Instead of not coveting or not stealing, what if we shared the world’s resources and shared what we had with our neighbour so that there was no reason to covet or steal?  What if we worked at having good relationships with those around us so that honouring others – not just parents – came first, and being deceitful or murderous was completely absent?  What if we worked at having a good relationship with God and with creation, so that we could understand that there is one God, but perhaps we might all come to God in different ways?  What if we could?

That’s a lot of questions.  But maybe the ten commandments is a good place to start that shift, from “don’t do wrong” to “do right,” from “or else there’s punishment” to “because there is a reward in living.”

I don’t think any church has answers to all the questions, but I do think it’s a faith-filled community in which to explore and to seek answers on our life’s journey.  And it should be a place where hope and optimism lead that journey.  After all, I’d rather learn how we can make a better world with God and each other, rather than just how we should not screw it up some more.