Do you know the Lord's Prayer?

I remember when I was little, the very first thing I learned about church was that everyone could say the Lord's Prayer from memory.  There was something pretty powerful about 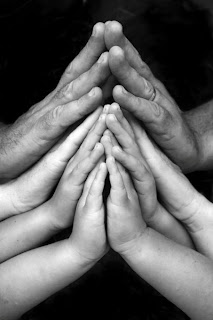 that, a whole church full of people kneeling, bowing their heads and reciting the words together, "Our Father, who art in heaven …"

I'm sure every faith tradition has its unifying action, prayer or song or ritual, and for me The Lord's Prayer was exactly that.  The notion that people all around the world were reciting the same words, maybe in different languages, maybe different phrasing, maybe different intonation, some reserved and thoughtfully, some exuberantly, some spoken, some sung, but all the same words: there's a pretty powerful sense of unity there.

We were watching the movie "42" the other night, about legendary baseball player Jackie Robinson becoming the first black man to play professional baseball in the, then, all-white major leagues.  There's a scene at the opening of his first game in a Brooklyn Dodgers uniform.  As a man sings the American national anthem, the camera pans across the stadium, moving down the line of all-white-but-one players just in time for the words "the land of the free and the home of the brave."  "The land of the free."  Fine words to sing, but the meaning needed some work.  Still does, and we might remember that, too, that our national anthem asks God to "keep our land, glorious and free" - for everyone.

It asks God for some pretty big things.  Well, actually it seems to demand some pretty big things.  Someone I know likes to sneak a "please" in there every so often, just because it seems like we're being pretty demanding.  After all, it asks for a lot, but offers …what?
It's a beautiful prayer, but unless it's based on a relationship that is true, the demands are simply that, demands.  To call God father - or mother - requires a commitment to that relationship being true.  To "hallow" God's name requires a willingness to embrace the holiness of God.  To ask for our daily bread requires we be responsible for the life that nourishment feeds.  To ask for forgiveness as we forgive others requires we actually do that - forgive others - and a desire to be forgiven ourselves.  To ask for protection and deliverance requires hope in the future.

To know these words in prayer is to know God in your life and to know more than words.
Posted by RevRob at 22:00 No comments: