We all have doubt

So maybe we should stop calling him “Doubting Thomas.”  Remember the disciple that wasn’t there?  In John’s Gospel, Jesus appears to all the disciples in a room on the evening of the resurrection, all the disciples except Thomas.  When the others tell Thomas, he doesn’t believe them.  And he won’t believe them until he sees the evidence for himself.  He does, of course, and believes.  “Blessed are those,” says Jesus, “who have not seen and yet have come to believe” (John 20:29). 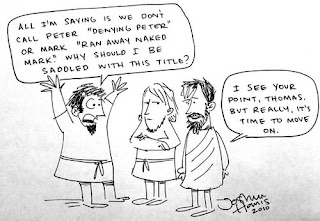 Doubt seems to be a constant in the Easter narrative.  I wonder how many of the disciples heard Jesus, at supper, say that one of them will betray him and thought “will it be me?”  When Jesus is arrested, I wonder how many of the disciples went home thinking “that’s that, then.”  Only Peter seems to have followed.  And he denies knowing Jesus.  After Jesus’ death, I wonder if the disciples simply stayed together to mourn, wondering what they’ll do, now that it was over.  It certainly doesn’t seem like they anticipated what would happen next.  And when it does, even Mary wonders first where other may have taken him.  She doesn’t even recognize Jesus when she sees him, at first thinking he’s the gardener, because she didn’t expect to see him.  The disciples sure seem to doubt her story.

They believe Jesus is alive as they see him, all of them.  Thomas is simply the only one who voices his doubt.

I think he’s a hero.  He should be “Brave Thomas,” the only one bold enough and honest enough to voice his doubt.

I used to think that we’re all Thomas in this story.  I’m pretty sure that we’ve all found ourselves with doubts and questions, right?  But we’re not all Thomas.  We wish, maybe, that we were.  But so many people are more inclined to be like the others, afraid and in hiding, unwilling to ask the questions that will lead us to belief and understanding.  Or worse, living a blind faith that’s willing to accept whatever we’re told and rigidly adhering to a system of belief that we’ve never even thought about.

I want to be Thomas.  I want to doubt and ask the questions that will bring me closer to seeing the truth, to understanding what Jesus was all about, what God means in and for my life.  I want to know what is true because it is, not just because someone else said so.  Don’t you?

Jesus isn’t angry with Thomas, or any of the others, for doubting.  He’s reassuring and encouraging.  “As the Father has sent me, so I send you,” he says to them all (John 20:21).  Go and tell others, go and teach and love and forgive, just like I showed you.  And they will show others, and they will show more.

I wonder if that isn’t what the author of John’s gospel is getting at here.  In response to Thomas, he writes that Jesus says “have you believed because you have seen me?  Blessed are those who have not seen and yet have come to believe." But he goes on, and writes that “Jesus did many other signs in the presence of his disciples, which are not written in this book.  But these are written so that you may come to believe that Jesus is the Messiah, the Son of God, and that through believing you may have life in his name.”  (John 20:29-31)

The stories of Jesus lead us to wonder and question, to take our uncertainty about life and learn to experience love.  They lead us to take our doubts and say “look around you.”  And when we do, we just might see Jesus.
Posted by RevRob at 22:40 No comments: