We hear so many amazing stories about Jesus, it's nice to hear something ordinary every now and then.  It's all relative, of course.  "Ordinary" for Jesus is still pretty amazing.

But, this week, the gospel reading set for Sunday is just that.  Well, it's not so much ordinary as a "non-story."  It's really just a couple of transition moments that connect stories we know well.  A few verses from here and a few verses from there in the sixth chapter of Mark's gospel, similar passing moments around big, substantial ones.

Jesus has sent the disciples out on their first mission and it's gone well.  Interjected here, as we heard last week, is the story of the death of John the Baptist at the hands of Herod.  Then we have the miracles of Jesus feeding the 5,000 and Jesus walking on the water.  But we're not hearing those stories, we're just hearing how Jesus and the disciples get from one to the next.  Perhaps we should call these "untitled moments."

Just like Jesus, our lives are full of these "untitled moments."  And they're not nothing.  Look what happens with Jesus.  Jesus realizes that both he and the disciples are in need of rest, so he invites them to get away from the crowd by crossing the lake.  But the crowd follows them round on the shore and is waiting for them when they get there and "he had compassion for them, because they were like sheep without a shepherd" (Mark 6:34), so he spends time with them, teaching.  That's followed by The Feeding of The 5,000 and Jesus Walks On Water, the stories we don't hear this week.  Later, we'll hear how Jesus is followed everywhere by crowds bringing the sick, and all are healed.

Jesus, in his human-ness, needs rest and recognizes that the disciples do, too.  We all should.  But this isn't about the sabbath day of rest, a sabbatical or an extended vacation, it's just about a moment to rest.  After all, there's much to do.

Yes, that sounds so ordinary, but that's just the point: Jesus gets tired, too.  Remember what Jesus was doing a couple of chapters ago, when they were in the boat and the storm came up?  He was asleep in the back.  To engage the fullness which is the world around us, we need to balance it with some kind of rest.  Perhaps it doesn't have to be much.  The artist Salvador Dali would sit in a chair with a heavy key in one hand and a plate on the floor underneath it.  He would doze and fall asleep, dropping the key which would hit the plate and wake him up.  He claimed to be fully refreshed in that time.  Some people lie on the couch or even put their pyjamas on and get in bed for an hour.  Some people sleep on the boat ride. 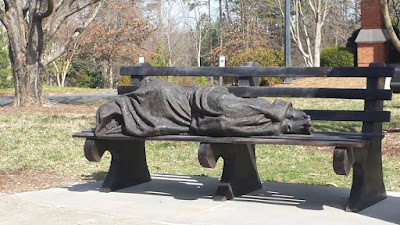 The majority of our life's journey is made up of "untitled moments."  It's the ordinary, everyday to us.  But that's just it, it's life.  How important is that?
Posted by RevRob at 19:12 No comments: