I wonder what it feels like to be a fish.  One day you’re swimming around, minding your own business, maybe hanging out with some other fish, just getting comfortable in a nice little eddy, snacking on stuff floating by, when - BAM! - you’re hooked.  Next thing you know you’re eye up in a frying pan.

Oh sure, you can fight it.  You might even break the line or dislodge the hook and get away, but you’ll always feel it.  And the other fish will always be looking at you sideways and wondering if it might happen to them.  Soon you’re off on a shoal by yourself wondering what happened to those lazy days in school.

I think that’s sometimes how people see the church.  After all, didn’t Jesus call his first disciples - who were fishermen - to come and fish for people?  (Matthew 4, Mark 1, Luke 5.)  For those who find themselves to be spiritual, but not religious, I wonder if this isn’t a key part of that - that they’re not interested in being hooked.  And for those that used to attend church and now don't, have they found it to be as boring as being, well, dead in the frying pan, or have they been left scarred by the experience?  For some, evangelism seems to mean that aggressive “catching” of people who then become one of “us,” saved from the sea of the real world.  Maybe they don’t see that kind of fishing as being saved. 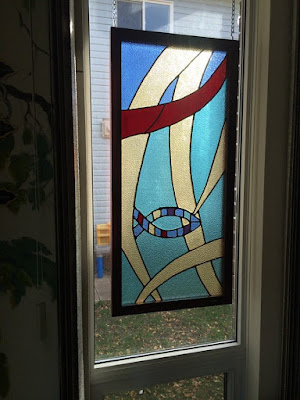 But look at the story again and we might be able to describe the image a little differently.  The fishermen Jesus called as his first disciples didn’t use hooks, they used a net.  So what if we did that.  Our net is the love of Jesus that we are called to live out.  If we live that kind of life, we bring love to the world.  Not just the warm, fuzzy romantic stuff on Valentine’s Day, but the deep, difficult love that calls us to care for the poor and the sick, to be kind and compassionate even to our enemies and to love the seemingly unlovable.  That’s a net that holds people up but doesn’t hold them back, that embraces them but doesn’t imprison them, that includes all and excludes none.  That’s what evangelizing means, by the way: to proclaim the gospel in life, to tell the story and to live it, too.  In sharing that experience with the world, we build a net that connects people with each other and with God.

That’s not just the “capital-M” Minister’s job, by the way.  We all minister in our own way when we love and care.  So if we’re living and sharing that love, the “net” isn’t a thing we wield, it’s the people.  All the people.  And I know this because some pretty great things are happening at my church right now and I’m not even there, I’m on sabbatical.  It’s the people: they’re being ministers.

And they're not the only ones.  Perhaps you should jump in and see.  I’m pretty sure they’re doing it on porpoise.
Posted by RevRob at 19:00 No comments: