I have a method for these weekly blogs.  It works like this.

They're usually based on the scripture readings prescribed for the Sunday that week.  So I look ahead at about six months and see if there's any themes that stand out or ideas I need to really plan ahead.  But mostly it comes down to that week.

On Monday, I read the scripture passages for the next Sunday, think about them and see if anything leaps out at me, needs to be addressed or seems particularly relevant to what's happening in the world.  So I begin with wondering about what I think the scriptures might be saying to me.

Over the next couple of days I read.  Commentaries, blogs, newspaper articles, books or, at least, parts of books.  By Wednesday, I'm thinking about what I'd like to say and I start to write something down.

That doesn't mean I'm done with it, though.  This is the beginning of what I'm going to say on Sunday morning.  So, once the blog's done, it keeps on growing.  With any luck, it'll keep on growing in those who read it or hear it.

It's kind of like the parables in Mark's gospel that are on tap for this Sunday.  Two short little metaphors in Mark 4:26-34 about the kingdom of God.  The kingdom is like seed that is scattered on the ground and begins to grow, says Mark.  We don't know how it grows, it just does.  Or like a mustard seed that starts out small and keeps growing into the largest of trees. 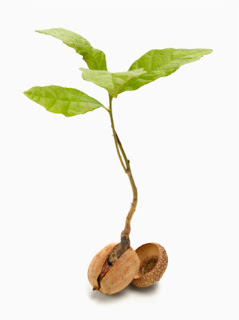 We all start out small and become something bigger, physically, emotionally, spiritually - in every way.  Ideally, we become what we're supposed to be, just like the mustard seed that becomes "the greatest of all shrubs, and puts forth large branches, so that the birds of the air can make nests in its shade" (Mark 4:32), right?  Well, that depends on your perspective, doesn't it?  Depending on where you live, mustard's a weed and not big enough for a nest and it's not the smallest seed.  But consider the context: in first century Palestine, maybe it grew big and maybe it was the smallest seed.  Or maybe the mustard seed has a spectacularly positive self image.

The point is, a parable's not just a metaphor.  Nor is it just a story or a single point.  It's a an opportunity for learning that connects with who we are.  And that means that it will be heard and understood from a variety of perspectives.  The mustard seed parable may mean so much more than just greatness from the tiniest beginnings.

The scattered seed that grows certainly isn't a parable about good farming practice.  But it could be about the generous abundance of God's Word or, more significantly, about the mystery of how it grows.  Sure, we can teach the science of how a seed grows, but that won't describe the experience of growth or the beauty of what it produces or how it then feeds others.

That's the thing about the "blog parable."  The point isn't just how it's written or even what it says, it's that it's part of the experience of growth, wonder and thought.

I think that's why Mark writes that "with many such parables he spoke the word to them, as they were able to hear it; he did not speak to them except in parables, but he explained everything in private to his disciples" (Mark 4:33-34).  It's not that the parables were all that hard to understand on the surface.  If they were, that wouldn't be a very effective teaching tool.  Nor was it that the understanding was secret and only the disciples had the secret de-coder ring.  It's that each of us comes with fresh eyes and our own perspective and parables are multifaceted just like us.
Posted by RevRob at 21:01 No comments: