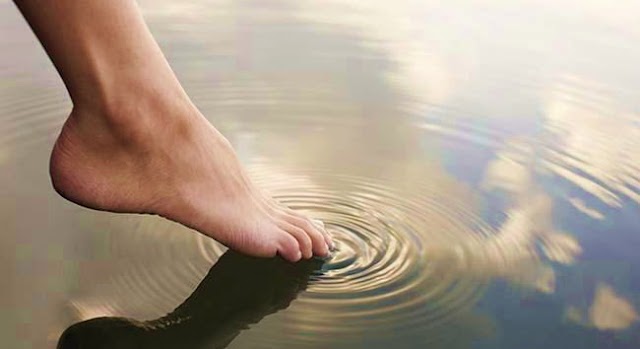 As a minister, I've always hoped that people would never hear a sermon or read a column or a blog or listen to something I said and assume that it was right just because I, The Minister, said it.  I've always hoped that people would think about it, consider it, and, hopefully, allow it to inspire them to think for themselves about whatever topic or theme we were talking about.  Maybe they'd like to find out more about it, hear what others have to say, and form their own understanding of how it speaks to them.  Maybe they agree with me, maybe they don't, maybe they agree with someone else, maybe they don't.  Either way, they're wondering about how the story - and God - is speaking to them.

So I'm always a little embarrassed to have to confess when I think I've done that very thing, accepting what's been said about something in the Bible, even if it didn't speak to me.

Sorry if that sounds a little obscure, but I'm up against the story of Jesus walking on water this week, the version in Matthew 14:22-34.  It's never been a favourite story of mine, I think mostly because I simply didn't get it.  So I accepted what I heard and read.  And still it didn't really speak to me.  Until recently.

Yes, I understand that it's one of the miracle stories that affirms the divinity of Jesus and calls us to have faith.  And I'm okay with that.

But I was always taught that there's a flipside to that.  When the disciples see Jesus coming towards them, walking across the water in the storm, they're afraid.  Not of the storm, but because they don't recognize who it is.  So Jesus tells them, "take heart, it's me, don't be afraid."  Then Peter says "if it's really you, then tell me to walk on the water towards you."  Jesus tells him to, and off Peter goes.  Until he starts to be more aware of the storm around him and he starts to sink.  He calls out to Jesus who saves him and says “You of little faith, why did you doubt?” (Matt.14:31.)

Slam.  No matter whether you hear compassion, criticism or disappointment in Jesus' voice, the point seems to be that Peter failed because he didn't have enough faith.  He doubted when he should have believed.  Thank goodness Jesus was there to save him.  Yes, thank goodness.

What if Jesus meant to congratulate Peter?  What if Jesus really meant "wow, Peter, that was awesome!  Look what you did with just a little faith: you got out of the safety of the boat, took the risk, and came to me.  And look what happened when you began to doubt that you'd succeed.  It didn't turn out the way you thought it would, but I was there with you.  The whole time, I was there with you."

What if this story is about reminding us that faith is about risk, not safety?  Everyone else stayed in the boat - the place of safety - and Peter was the one with faith enough to step out.  What if the story is reminding us that faith isn't about the successful completion of a task, but about making the effort in the first place.  Maybe it wasn't enough faith to defeat the laws of physics, but it was enough to bring Peter closer to Jesus.  What if faith isn't about blindly believing something because you were told to, but about thinking, discerning, risking, questioning, even doubting, because it brings you closer to God?