It's really about love

I'm going to wander a little bit this week.  Please come with me.

Here's where I usually reflect on one of the passages of scripture we'll be hearing in church this Sunday.  But this week is our annual Blessing of the Animals service at the Ag Grounds and Nikita, the dog that allows us to live with her and serve her every need, has inspired me to talk about something else: the Pope.

I have to say that I really like this Pope Francis.  I find him to be very much being like Jesus.  I'm not saying he's perfect and I have a whole lot of questions about some doctrinal issues and living in a palace and all that.  But I find his overall message speaks to being Christ-like and following the Way of Jesus.  Particularly lately, now that lots of people have started to criticize him, dislike him and - thank you, Fox News for this - fear him because "he's the most dangerous man on the planet" because of that message. 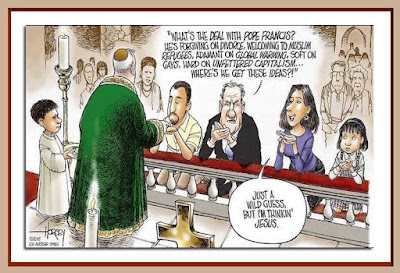 He wants everyone to care for the poor and marginalized, welcome refugees and fight oppression, respect and care for the earth and he's using his position to get that message out to world leaders and ordinary people alike.

That all sounds good and I'm sure we can all get behind that, I hope.  As long as it stays in that warm, comforting, unintrusive Sunday morning sermon that doesn't challenge us to go and actually live it out.  But he's not doing that, he's engaging church leaders, world leaders and politicians and asserting that action needs to follow the words.

For many people that makes him political and the church should stay out of politics.  Separation of church and state, after all.  Okay.  I wonder, though, if we aren't once again making something black and white that isn't.  If we mean the separation of the institutions that are church and state and the structures that we have built for the management of those two institutions, then I can get behind that.

But how can it be that black and white?  Both those institutions aren't meant to control, they're meant to serve.  They're meant to care for people, protect them and nurture them and to support the ideals of justice, equality, respect and compassion.  And I don't think I'm being naive, I'm just pretty sure that it should be that way and it isn't.  As the Pope said in his address to the US Congress this week, "you are called to defend and preserve the dignity of your fellow citizens in the tireless and demanding pursuit of the common good, for this is the chief aim of all politics. A political society endures when it seeks, as a vocation, to satisfy common needs by stimulating the growth of all its members, especially those in situations of greater vulnerability or risk. Legislative activity is always based on care for the people. To this you have been invited, called and convened by those who elected you."

And also with you.

Yes, that absolutely applies to both institutions because no, it isn't always that way in churches, either.  But that also shouldn't negate the call to address those core values or their invocation in any context, religious, political or cultural.  We have advanced so far in 2,000 years and yet the call to put love, respect and care for each other into action is still as radical and challenging as it was then.

He's in the US right now, but I wonder what the Pope would say to Canada, with an election coming.  I imagine that he would keep on saying what he's been saying and remind people to vote with these issues in mind.  Not who to vote for, of course, you have to figure that out for yourself.  And, besides, that'd be too political.

I think and I hope that the Pope's goal is to change the world for the better.  Also like Jesus, I don't suppose he thinks that's going to happen overnight.  And, like he says, "to change the world we must be good to those who cannot repay us."  That's how Nikita inspired my thoughts here.  I think I know what he means, but I also think it's not exactly right.  Just like the child in last week's reading from Mark that Jesus holds up as an example of how we should welcome all, just like Nikita and all our pets, just like so many people in the world, it will seem that they will not be able to repay us for our actions, our care and our kindness.  But they do: with love, with companionship and with grace.