Jesus, the healer, is featured in the story this week from Mark's gospel.  Well, it's two stories, really, but they're each a part of the other so that they're rather inseparable (Mark 5:21-43).

Jairus, a local leader of the synagogue, comes to Jesus and begs for his help.  His daughter is very sick and he's desperate.  Jesus agrees to go with him to his home, but, by now, he's constantly surrounded by crowds who've heard the stories about him, and he's not moving too quickly.  A woman, "who had been suffering from hemorrhages for twelve years," comes up to Jesus in the crowd, desperately believing that if she could only touch him, she would be healed.  She does, and is healed, but Jesus notices that something's happened and asks who touched him.  Afraid, the woman admits to it and Jesus tells her that her faith has healed her and sends her on her way.  But that's held Jesus up and people come from Jairus' house to tell him that his daughter is dead.  Jesus says to him, "do not fear, only believe," and heads to his house anyway.  He tells them that she is not dead, but only sleeping.  He takes her hand and tells her to get up.  She does and is alive and hungry.

Mark tells it way better (Matthew and Luke do, as well), but I think that's the gist of it.  It's a long story, especially since it includes two healings, but the point is that Jesus heals them both.  Both received life.  So did everyone else in the story.

Jesus, after all, is a healer, not a doctor.  Please feel free to believe that actual physical miracles occurred in this story or that it's metaphorical.  Either way, what is true here is that Jesus heals brokenness and gives life.  Those are relational, qualitative things, and that kind of health, wholeness and living are for all of us.

Jairus is a leader of the community, he has status and probably some wealth.  He even gets a name in the story.  But that can't help his daughter who's dying.  The woman is an outcast, made poor by her affliction (she tried all the doctors) and poorer still by being "unclean" to the rest of her community.  She is, for society, already dead.

Both come to Jesus in desperation.  One publicly humbles himself, the other hides and tries to sneak in.  But both desperately seek what Jesus offers: healing.  They each reach out to Jesus in their own way, from their own place in society, from their own desire for wholeness.  They choose Jesus.

Her faith makes her well, Jesus says.  And to Jairus he says "do not fear, only believe."

Sometimes, I suspect, we might think it's a bit of a copout on the miracle aspect of the story to say it's not the miracle that matters, it's the engagement with Jesus.  But, oh, that is so wrong: a miracle's just a little tiny sliver of the life that comes with faith.  With faith, miracles are everywhere. 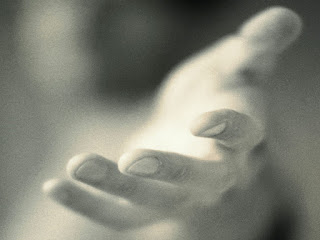 Faith demands that we live and love as Jesus did, that we think and wonder, and that we reach out to the world around us.  Just as Jesus did.

Because, look, there's a third character in this story.  Jairus' daughter.  To her, Jesus offers an outstretched hand and the invitation to live.  Will you offer a hand to the broken, the weary, the rejected, the outcast or even those who's life seems to have left them?  Do not fear, only believe.
Posted by RevRob at 21:03 No comments: