Looking for a more radical perspective

There's a moment in the 2009 film 'Passchendaele,' Paul Gross's Canadian epic about the First World War, which serves to remind me of the importance of perspective.

A doctor, who has never been to the battlefield, is addressing a room full of doctors and nurses about artillery wounds and the damage shrapnel can inflict.  He says that the new artillery represents the greatest single challenge to an individual on the battlefield.  He turns to Gross's Sgt. Dunne and says "Sergeant, do you agree?"  After thinking a minute, and remembering his own experience, he says "no sir, I'm sorry, I don't.  The single greatest challenge to an individual on the battlefield is trying to keep his matches dry."  Everyone laughs, thinking it a joke.  Everyone except Dunne's commander, who is embarrassed and angry.  He doesn't give Dunne a chance to say anymore then, but later, he has an opportunity to be clear: "if you're in the middle of a barrage and you reach for a smoke to steady your nerves and your matches are wet, well sir, your whole world buckles. It feels like it's coming apart at the seams."

One simple little thing.  The hinge on which rests other, much more complex things.

From the comfort of distance and disassociation, the doctor assumes the most obvious thing is the most important.  The thing which, coincidentally, is something he can deal with - physical trauma - and exert some control or influence over (he thinks).

But there's another, more radical perspective.  And when the audience hears it, they  aren't prepared for it and laugh it off as if it's a joke.  It was too different, too radical to hear.  Especially when they'd already heard what they wanted to: the "expert" opinion that suited their situation.  Their situation of comfort.

Right now we're in the middle of a series of Sundays on which we hear Jesus telling parables.  Sometimes, I think we hear many of Jesus parables as simple stories with a simple message.  One that we're now comfortable with hearing.  One that, while still meaningful in it's own way, we can put into a simple slogan about how we should behave.

But hang on, what about the radical Jesus who wanted us to transform our lives with love and respect and grace for all?  The story may be simple, sure, but is the message always that one obvious thing?

Look at the parable of the mustard seed.  The kingdom of heaven is like this tiniest of seeds that grows into a great shrub or even a tree that birds can nest in.  Okay, obvious exaggeration aside (mustard doesn't grow a tree), it seems simple enough: from the smallest of things comes something great. 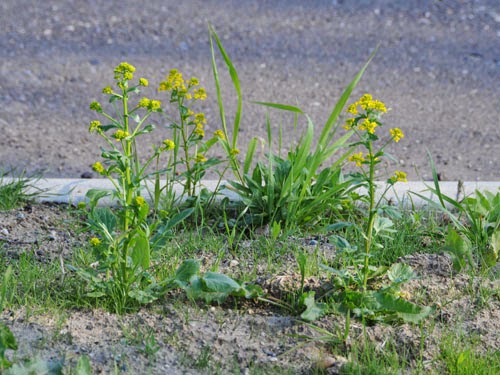 But isn't there more to this image?  Mustard's a weed.  Weeds are invasive, they try to take over wherever they crop up and farmers and gardeners alike are always trying to get rid of them.  Can the kingdom of heaven really be an invasive weed?  Why not?  It can be subversive as it breaks in where you least expect it.  It can take over and influence the world around it.

And being a "weed" is part of our perspective.  Not everyone has the same negative perspective: when a child brings a parent a beautiful bouquet of fresh picked dandelions, do you see a noxious weed or an offering of love?