Three in One in Three 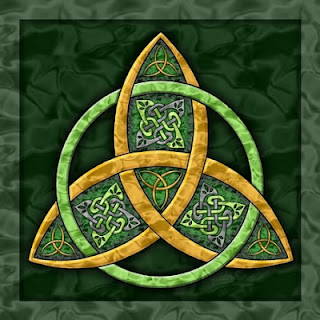 Since it's Trinity Sunday this week, I thought I'd look up "The Trinity" on Wikipedia, just to see what it says.  The Trinity's one of those church ideas that tends to scare people a little, I think, because it's a tricky concept to get our heads around.  And we're always trying to explain things, aren't we?

That's why Wikipedia is so cool, by the way.  Anyone and everyone can contribute to it.  Of course that's also why Wikipedia is "mostly accurate" in the same way that Miracle Max said Westly was "mostly dead" in The Princess Bride.  (Spoiler: he wasn't completely dead.)

So Wikipedia says that "the Christian doctrine of the Trinity defines God as three divine persons or hypostases [their fundamental or underlying state]: the Father, the Son (Jesus Christ), and the Holy Spirit; 'one God in three persons.'  The three persons are distinct, yet are one 'substance, essence or nature.'  A nature is what one is, while a person is who one is."

Right.  Well, there you go.  At least they go on to say that the Trinity "is considered to be a mystery of the Christian faith."  Yes it is.  And they go on to say a lot more.  A lot.  After all, we've been talking about this mystery for a long time.

The word "trinity" isn't in the bible.  It wasn't even used until the third century.  But it's the way we describe the relationship presented to us in Christian scripture, the relationship between God (the father), Jesus and the Holy Spirit.  People wondered.  We gave it a name.  We've wondered more ever since.

It's awfully hard to come up with something definitive that everyone can agree on.  And right there is the problem.

First of all, with all due respect to Wikipedia, trying to "define" God is limiting, to say the least.  Second, our relationship with God is both personal and communal (i.e. there's even more relationships).  That's a lot of unique and personal understanding to contend with and a lot of different contexts to take into consideration.

So it's a good thing that we constantly revisit this wonder that is the Trinity.

I believe that there is one God and we all come to that God in different ways.  Not just through different faith traditions, but even within those faith traditions.  Some people find the power of the Spirit to be their cornerstone, for example.  Witness all of the people these days who describe themselves as "spiritual" but not belonging to any tradition or church.  Or the "pentecostal" tradition that emphasizes the power of the Spirit at work in the world.  Or followers of Jesus, from those who follow the example of Jesus' life to those who look more to the atoning power of Jesus death or stress the need to receive "Jesus Christ as your personal Lord and Saviour."  Or those who look primarily to God as the creator, the power of the universe.

See, I think that we all connect with God in these many ways and we each, perhaps, have a relationship that is most meaningful to us, or at least more meaningful in some contexts.

But.  We should also remember that each of these doesn't stand alone.  In wondering at the immensity of the one God - can you really "define" God? - we can meet the life of Jesus, "the Word made flesh" (John 1:14), and the Holy Spirit that inspired and empowered the disciples at Pentecost (Acts 2).

We've sought other ways to describe the "three that are one," mostly to address the gender issue.  Creator, Redeemer, Sustainer is perhaps the best known of these.  But, hang on, doesn't it seem like we've lost a little bit of the important relational nature of the original?  Maybe Parent, Child and Love.  Or Augustine's 4th century attempt of "Lover, Beloved and Love between."  There are more.  You might even have your own.  After all, it's a mystery.
Posted by RevRob at 21:19 No comments: