Here's something different.  Back in June, I suggested that a re-reading of the Adam and Eve story might be about acquiring freewill and the choices that led them to step out into the world rather than the doctrine of Original Sin and being cast out of the Garden.  We've had our children's summer program this week with the dual themes of Creation and Creativity and that inspired me to a re-telling of the story from that more positive perspective.  It goes something like this.

In the beginning, the very beginning, God created the world: the day and the night, the land and the sea, trees and flowers and all the animals.  And then, God created humans named Adam and Eve, to help care for the wonderful world God had created.
Everyone lived happily together in the wonderful world that God had created: the trees and the grasses, the flowers and the leaves.  The animals and birds and fish had their own places and they played together with Adam and Eve.  And Adam and Eve could talk with the animals and learned their names, so everyone knew just what to call each other.  And that's good, God thought.
But, after awhile, God began to feel like things just weren’t finished yet, somehow.  It just seemed like it was all too perfect, like everything was just like God - which it was, of course, God created everything.  And God noticed that every day, everything was exactly the same.  Nothing was growing.  Nothing got older.  It didn’t change unless God changed it.  And Adam and Eve, they only ever did what God told them.  They didn’t seem to be interested in learning how to do things or doing anything for themselves.  They just didn’t seem interesting at all.
One day God said to Adam, “what’s your favourite colour?”
And Adam replied, “what’s 'favourite' mean?”
“The one you like the best,” God said.
“How do we know we like one more than the others?” Eve asked.
“You just do,” said God, “that’s why it’s your favourite.”
“I don’t think I do,” Adam said. “Why don’t you just tell me what to say.”
And God sighed a big heavy sigh and said “oh never mind.”
So God grew a big, beautiful tree with big, beautiful fruit on it, in the middle of the Garden and God called it The Tree of Knowing.  And in front of it, God put a big sign that said, “DON’T!” in really big letters, “Don’t eat this fruit.  There’s lots of others you can eat.  Leave this one alone.”
The very next day, Adam and Eve were walking by.  “My, that’s a big, beautiful tree with big, beautiful fruit on it,” said Eve.  “Hey,” said Adam, “that’s new.  I don’t think we’ve seen that before.”
“Yes,” said Eve, “and I’m hungry, so let’s try it.”
But then they saw the sign.  “Oh,” said Eve.  “Okay, then,” said Adam and they continued on their way.  But then they heard something they’d never heard before.
“Why?” said a snake that was sitting quietly in the grass.
“I’m sorry,” said Eve, “what did you say?”
“I said ...why?” replied the snake.
Adam and Eve looked at each other and then looked at the snake.  They didn’t know what to think.  Literally.
“What do you mean?” asked Eve.
Now snakes are pretty smart and this snake was smarter than most.  “I mean,” it began, “why?  Why can’t you eat that fruit?  It looks particularly delicious.  God did say that you could eat anything in the garden.  And fruit makes you smart and strong.”
“But there’s a sign,” replied Eve.  “It says DON’T in really big letters.”
“I know,” said the snake, “but think about it: why shouldn’t you just try it.  The sign might not be for you, it might mean others.  And did anyone ask you about it?  I bet it’s worth trying.”
“Hmmm,” thought Eve, and she did just that for the very first time: she thought about it.
“I think,” said Eve carefully, as it was the first time she had, “you make a good point, sir.  But God’s not here just now to ask.”
“So, why wait?”  said the snake, “why not just try it.  You’re hungry; it’s there.”
“I think,” said Eve more sure of herself than before, “I think I will.”  And with that, she picked one of the fruit and took a bite.  And it was delicious.  She smiled and said to Adam, “this is good.  Would you like to try it?”
“I think I will,” said Adam, and he did both those things for the first time.
“I think that’s my favourite fruit,” said Eve after awhile.
“I’d still pick apples as my favourite,” replied Adam.  “Let’s go over to the apple trees.”
“Ok,” said Eve, and they got up and started on their way.
But then Adam stopped and said “you know what?  I’ve been thinking.  Let’s go this way.”  And he turned down a different path.  “Maybe there’s something new this way, too.” 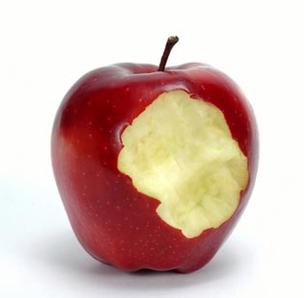 Now, God was missing Adam and Eve a little bit, so he went to look for them in the Garden.  But he didn’t see them because they’d taken a different path and it was very interesting and full of new things they were still exploring.
So God waited patiently for them to come back.  And when they did, God knew something was different right away.  Eve had decided that she didn’t like the sun being so bright in her eyes, so she found a really huge leaf from a tree and made it into a hat to cover her head and shade her eyes.  Adam found the path a little rough, so he found a big branch off a tree and made it into a walking stick.
When God saw them, God said “where have you guys been?”  And Adam replied, “we went to the apple trees because they’re my favourite fruit, but we went a different way and we saw so many different things and it got a little tiring so I made this cool walking stick to help me.”
“And I made this,” Eve added excitedly, “cause the sun was in my eyes.  I call it ... a hat.”
“Wait a minute,” said God, “what kind of fruit?”
“Apples,” Eve replied, “they’re his favourite, but I like the new fruit better.”
“Shhh,” said Adam quickly.
But it was too late - God heard and said to Eve “they’re his what?”
“His favourite,” answered Eve.
God looked at them again, more closely this time.  There was a long pause and then God said, “what have you done?  Right before you chose which fruit was your favourite, what did you do?”
Eve and Adam looked at each other and had a funny feeling.  They weren’t absolutely certain, but they were pretty sure they were in trouble.
“We saw there was a new tree,” said Eve carefully, “and the fruit looked good so we ate some.”
“Wasn’t there a sign by the tree?” asked God.
“Yes,” said Eve, suddenly realizing why God wasn’t happy, “but .... the snake!  The snake said I should try it.  The snake said it would be okay.”
“Eve ... “ God began softly.
But Adam, thinking he must be in trouble, too, jumped in with “I didn’t want to try it.  Eve made me.  It’s not my fault.”
“And the snake made me,” said Eve quickly, “so it’s not my fault either.”
And God sighed a big sigh.
“It’s no one’s fault,” God began.  “The snake didn’t make you, Eve, you chose to eat the fruit.  And Adam, don’t blame Eve.  You were there and you, too, chose to eat the fruit.  No one made you.  You each did it yourself.”  God paused.  Finally God said “you have free will.”
Adam and Eve looked at each other.  And they looked around to see if they could see this free will thingy they had.  And then Adam said, “what’s free will?”
And God told them “free will means that you can choose for yourself.  You can decide what you want to do on your own - you don’t need to be told what to do.”
“Awe, cool!!” said Adam.  But Eve looked a little concerned.  “Um, okay,” she said.  “But how will we know what to decide?”
“Well,” said God, “you need to find out all you can and then think about it and make a decision.  Remember when you talked to the snake?  The snake told you things you needed to know and you had already seen the fruit and the sign.  Then you thought about it and made a choice.”
“Right,” said Adam, “and we really enjoyed the fruit.”  “Mhmm,” agreed Eve.
“But you also saw the sign, didn’t you?” said God.  “It said DON’T in really big letters.  When you decide things for yourself, things happen and you have to live with what happens next, good or bad.”
“But how will we know what’s good and bad?” said Eve.
“That’s part of how we learn from making decisions for ourselves.  And there will be people who know lots of stuff that will teach you.  And I’ll always be there - sometimes you’ll get a feeling, just a feeling that something’s right or wrong, and that’s me.  Sometimes you’ll just know that you need to do something, just cause it’s right - that’ll be me.  Sometimes other people will teach you and show you and that’ll be me.  Sometimes, when you think you’re alone, you’ll just know that you’re not - and that’ll be me, too, because I’ll always be with you.”
“I’m having a feeling right now,” said Adam, “that things are going to be different.”
“They are,” said God.  “The whole world is going to be different for you now.  You have to leave this garden and go and take care of the earth for me.  And for you.  And for everyone that’s going to live in the world from now on.”
And Adam and Eve headed out of the garden on a new path.  The further they went, the more they both thought how much the world looked just like the Garden they lived in.  The sky was blue, the grass was green, there was day and night, there were birds in the air and animals all around.  Why, over there was their old friend, the big-furry-with-teeth they called bear.
“Hey, bear!” Adam called out, “how’re you?”
And bear turned and looked at them and ran towards them.  “Oh, look how happy he is to see us,” said Eve.  But as he got closer, they realized that they weren’t the only ones who could decide for themselves.  Bear had decided they looked delicious.  “I think we should run,” said Adam.
Posted by RevRob at 21:50 No comments: