I've been away.  That's my excuse.  Everyone needs a holiday sometime.  Except maybe Martin Luther.  He was one busy guy ...

Well, it's here.  The day that so many people look forward to, that rolls around every year on October 31.  Children love it.  There's decorations and costumes and parties.  There's fun and games.  And don't forget the chocolate.

I'm sorry, is there something else on October 31?

While The Reformation, the historical period which gave us Protestantism, had shown signs of its coming earlier, it's generally considered to begin with Martin Luther on October 31, 1517.  That's the day Luther nailed 95 Theses, his 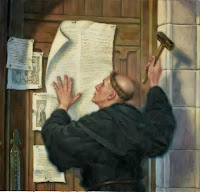 propositions that challenged the Roman Catholic church and its doctrines, to the door of the church in Wittenburg, Germany.

Wycliffe, Hus and others had tried to bring reform to the church before Luther, but it wasn't until Luther - and Zwingli, Calvin, Knox and others after him - that it really got traction.  There were certainly many issues that sparked the fire.  Luther, for instance, famously challenged the selling of indulgences (people could pay money - lots of it - in lieu of doing temporal penance for sin), but reformers had three "great" principles on which their theology rested.

First of all, scripture (the Bible) was the sole authority on matters of faith, life and conduct.  Teachings and traditions of the church were secondary to the truth of the Bible.

Second, we are justified (meaning to be made "right") before God by faith alone, understanding this to be in the context of God's gift of grace.  As Paul writes: "saved by grace through faith and that not of ourselves, it is the gift of God" (Eph. 2:8.9).  Works are important in this life, but it is faith, through grace, that brings us to God.

Third, the belief in "the priesthood of all believers."  We are all ministers and need no one but Jesus to bring us to God.  We have leaders, but the power of the priesthood should be nothing more than that.

As a result, reformers rejected the authority of the Pope and a host of other church teachings.  Of course, they couldn't seem to agree on much more after that and Protestantism fractured into a variety of individual denominations.

And then there's what was happening in England at the time with Henry VIII that resulted in the Church of England and anglicans around the world.  But that's another story.

In fact, there's way much more to this Reformation story, of course, like the reform movement's revolutionary use of media.  The new printing press made the mass production of leaflets possible.  Or the religious wars (shouldn't that be some kind of oxymoron?) that followed, like The Thirty Years War.  It's fascinating stuff and there are many very thick books that record the history of the period.

But that's what bothers me.  Most authorities suggest The Reformation ended about 1750.  It's a historic period consigned to the distant past.  We can say that the period of The Reformation was 1517-1750.  Period.  What have we been doing since, then?

Regardless of which denomination of christianity you are part of, regardless of which faith you follow, even of no faith at all, doesn't it strike you that asking questions and challenging things we believe to be fundamentally wrong - literally "protesting" - and consciously trying to reform our thinking with the world around us, these things are always necessary?  Shouldn't we always be "reforming" our faith as we reform our lives?

Jesus does not call us to follow with blind faith, but with eyes open, hands out, minds and hearts working together.  Jesus' example is one of challenging systems and structures that hurt people and impair relationships.  It's one of justice, sincerity and respect.  Through these things, Jesus' example shows us that, before God, unity and conformity are not the same thing.  Regardless of the labels we use, that's an example I get behind.
Posted by RevRob at 21:24 No comments: