Can I talk about “All Aboard the Ark!” for a minute?  Stick with me, it’ll be worth it.

“All Aboard the Ark!” was our children’s summer program at the church this year, just last week.  A big “thank you” to all the children, parents, helpers, supporters and leaders who had a part in making a great week.

We didn’t really focus on the story itself so much as the ark.  Our idea was to wonder about how everyone got along, building the ark and spending all that time cooped up in conditions that weren’t really cruise ship worthy in order that they could make a new beginning for the world.

On Monday we introduced the story: God had decided that things hadn’t turned out the way God thought they would, so God, much like an artist with a painting that hadn’t turned out, decided to wash it all away.  At least, that’s how God described it to Noah when he asks Noah to help.  God wants Noah to build an ark to save two of every creature so that the world can start again, pretty much from scratch.  God even gets the animals to help Noah build the ark.  And we did.  The children got to be there favourite animal and we put together some big pieces of chloroplast (thanks Bryan!) and started building the ark.  Together.

On Tuesday, it rained.  In the story called “Water all around,” anyway, and the animals were worried.  They tried to find God and ask God to stop the rain, but only the fish, in the end, knew where God was: just like the water to the fish, God is all around us, always with us. 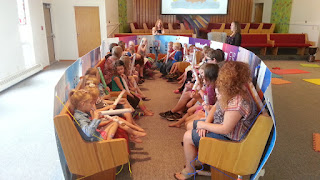 The Monday craft had been making rainsticks (a percussion instrument that simulates the sound of rain) so the kids could be part of the story.  Check out our Facebook page for a short video clip of them in action.

By Wednesday, we were on the ark and it was pretty crowded, as you might expect.  We talked about personal space, both our own and respecting other’s, with a story called “Personal Space Camp.”  Both the craft and the games included Tic-Tac-Toe, a game that’s all about individual spaces.

Thursday, with everyone respecting each others’ space, was an opportunity to learn about how we can be good neighbours.  So we talked about the Golden Rule, “do unto others as you would have them do to you,” with a story about a rabbit who wonders how to deal with his new neighbours, the otters.  Yes, it’s called “Do Unto Otters.”

When the ark ran aground on Friday, we had a story called “Water All Around,” in which the raven and the dove, the most plain of all the birds, are the only ones brave enough to go out in search of land.  When the dove can’t find her way back with the olive branch, all the other brightly coloured birds make a rainbow to show her where the ark is.  We sang “This little light of mine” and wondered about the amazing things that each of us can accomplish, both by ourselves and together, remembering that God is always with us.  Just like the fish knew.

It was a great week.  And thanks again to everyone who participated and helped out.

Here’s the thing.  When all was said and done and the week was over, I was sitting reading the news.  All I could think was how much I’d like to take everyone, from everywhere, and sit them down in the kids’ makeshift ark.  We’d read those stories and sing some songs and learn how we otter be getting along.  We’d learn about respecting each other and all that we can accomplish with our individual gifts and, together, fly a little higher and a little brighter over a new world.  It may be child-like, but it sure isn’t childish.

Our pretend ark was church pews, rope and big pieces of plastic.  But the world is an ark, too.  And, just like our week on the ark, we should build it together, know that God is always with us, live with respect, treat others as we’d like them to treat us, and we shouldn’t be afraid to live to the fullest.
Posted by RevRob at 23:08 No comments: