A head in the clouds 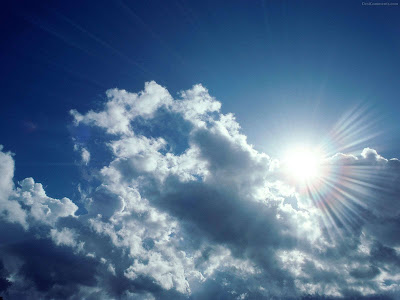 We've been doing some little renovations and updating of our church this summer.  Mostly volunteers from the congregation have been renovating and expanding our kitchen and painting.  It's just a few things that need doing after twenty-something years.

I was talking to somebody about that today, reminding them - and me - that when this "new" church building was built, it was built by members of the congregation themselves.  In fact there's a great album of pictures chronicling the build.  "Really?," they said, they had no idea there was an album.

Well, there's more than that album.  Thanks to some conscientious "historians," there's a few albums with pictures and old bulletins and newsletters, clippings from the papers, great mementoes of what's happened, when and who was involved.  They help tell part of the story of faith in this community.

I think that's a little of what the writer of the Letter to the Hebrews was doing in the passage we're hearing this week (Hebrews 11:29-12:2).  It's a collection of some figures and events, historical moments of faith to remind us of what it means to be faithful.

And it's not just happy memories, of course.  Inspiration can come from moments of hardship and suffering, too.  Some "suffered mocking and flogging, and even chains and imprisonment.  They were stoned to death, they were sawn in two, they were killed by the sword; they went about in skins of sheep and goats, destitute, persecuted, tormented" (Hebrews 11:36-37).

I don't suppose any of our albums have pictures like that, thank goodness.

But it reminds me to pause for a moment and consider what examples of faith might inspire us today, ones that might be right in front of us.

What about all those "saints," for example that built our church, both really and metaphorically?  Like the examples in Hebrews, many struggled as much as celebrated.  Some are no longer with us.

The author of the Letter to the Hebrews writes that "since we are surrounded by so great a cloud of witnesses, let us also lay aside every weight and the sin that clings so closely, and let us run with perseverance the race that is set before us" (Hebrews 12:1).  How ironic that we think of having a "head in the clouds" as being someone who isn't really aware of their surroundings, someone who's off in a fantasy world of their own.  I'd challenge you to put your head in this cloud for a few minutes and think about who might be an example of faith for you, an example worth following.

Now, hang on a minute, it's not as easy as it sounds.  It requires some discernment.  First, discerning what is truly an example of faith and second, how it might apply in your own life.  After all, everyone's journey is uniquely their own.

So look both ways as you step out in this cloud: look back - and around you! - and see the examples of faith that are there; and look forward, on to your own journey.
Posted by RevRob at 23:40 No comments: