Just a scratch behind the ear

We have a new puppy in our lives.  He’s a merle coloured chihuahua named Yoda.  We named him that in the hopes that he would be a small wise man with big ears.  You know, just like Yoda. 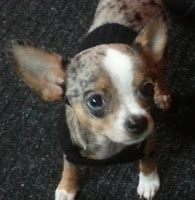 He’s not, of course.  Not yet, anyway.  Right now he’s a five month old puppy, so a whole lot of training has been happening at our house.  And here’s a few things he’s taught us: if you put it near me, I will chew it; I like to eat anything that’s on the ground - anything - but I’ll be a little fussy about when, or if, I’ll eat what’s in my bowl; the living room rug is a good place to do my business; I have no intention of doing as you say and, by the way - catch me; you better keep your eyes on the ground, cause I go where I want; I love my mommy and will cuddle and sleep in her lap, but that guy’s only good for being a bigger chew toy.

We’re learning, but I’m pretty sure he thinks we could do better.

Of course, I think he could do better.  He can be uncooperative, frustrating, time consuming, needy and annoying.  And super cute.  And friendly and fun and loving.  And did I mention super cute?  One minute he’ll be a rotten little so-and-so and the next minute he’ll be licking your hand and curl up next to you the couch.

He’s like a three year old boy.  Or a thirty year old.  Or a fifty year old.

Yeah, that’s where I’m going with this.  If you have a pet or a farm animal, you likely know that you can’t just expect them to be and do exactly what you want all the time.  Sooner or later there are moments when those creatures can behave in a way that's more than a little trying.  Then, a short while later, you'll be giving them an affectionate little scratch behind the ear and a smile like everything's fine and all is forgiven.

I know, you want to say "but it's not that simple for us.  We're much more complicated and sophisticated than animals."  Sure we are.  Mostly.  But why can't we be that simple - not simplistic - just simple?  Why can’t we be that childlike - not childish - about it?  That's the kind of simple grace God has for us.  And the kind of grace God would like us to have for each other, for all creatures and for the earth itself.

For the past few years, we’ve celebrated the last Sunday of September with a Blessing of the Animals at the Ag Grounds.  We’ve had many dogs and cats, kittens and puppies, a goat, a bearded dragon, chickens and bunnies.  We’d love to have horses, sheep, cattle and pretty much anyone.  Yoda will be there for the first time, sharing in the blessing that we are all a part of.

God's blessing rests on all creation.  Sharing that sense of blessing with each other, the other creatures who share this earth, and the earth itself, connects us.  “The earth does not belong to us, we belong to the earth.  All things are connected like the blood that unites us all.  We do not weave this web of life.  We are merely a strand of it.  Whatever we do to the web, we do to ourselves."  (Attributed to Chief Seattle, 1854.)
Posted by RevRob at 22:59 No comments: