Yes, Gretta, there is a God 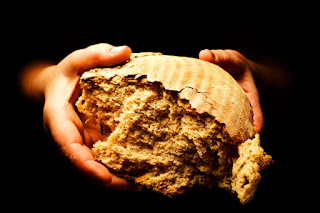 The gospel reading this week is another piece of the "I am the Bread of Life" section of John.  It includes these verses: "The Jews then disputed among themselves, saying, 'How can this man give us his flesh to eat?'  So Jesus said to them, 'Very truly, I tell you, unless you eat the flesh of the Son of Man and drink his blood, you have no life in you.  Those who eat my flesh and drink my blood have eternal life, and I will raise them up on the last day; for my flesh is true food and my blood is true drink'" (John 6:52-55).

Yes, Jesus seems to be doubling down on the bread image and telling people that they actually needed to eat him.  It's no wonder pagans thought the early christians were the crazy ones, being cannibals and all.

Read on, though, and in the very next verse we hear "those who eat my flesh and drink my blood abide in me, and I in them."  A little less literalism and a little more thought might get to understanding what Jesus is driving at: it's not just about changing behaviour, it's about taking God so intrinsically into your life - ingesting, as it were - that it is true living, not just behaving.

Maybe I'm being overly simplistic and I could say a lot more, but I need to leave it there for now, because I've been thinking about something else this week.

Last week, in addressing the puzzle which is the body of Christ, I suggested that going a little "rogue" sometimes might not be such a bad idea.  Being revolutionary and radical might be something the church should keep in mind, especially the United Church as it engages in its triennial meeting this month, facing the possibility of some pretty profound changes.  Besides, I said, "following the way of Jesus is revolutionary in so many ways, it can sometimes challenge doctrine and, most importantly, challenge us to go places we've not been before and build communities that are new and different."

And in the week before that meeting began came the story that the United Church will be "reviewing" one of it's ministers in Toronto to consider her fitness for ministry.  Since 2001, Gretta Vosper has made it clear that she doesn't believe there is "a god called God."  Her 2008 book "With or Without God" was a bestseller and her personal website describes her as "minister, author, atheist."  Read the book, check her webpage and google the story, if you like, it's from Canadian Press, so it's pretty much everywhere.

It's been awhile since I read her book and I don't really want to debate it.  I'd just like to say that, initially, she makes some good points.  But I'd like to pick up on something in the news article.  I know that's a little dangerous because you never know how accurate the press is with these things, but I think it does reflect her position.  The article says that she "said the idea of an interventionist, supernatural being on which so much church doctrine is based belongs to an outdated world view.  What's important, she says, is that her views hearken to Christianity's beginnings, before the focus shifted from how one lived to doctrinal belief in God, Jesus and the Bible."

Yes, Gretta, the supernatural being thing is outdated, for most people.  And yes, Gretta, how one lives is important - even most important - and that ought to be our focus, as it was for The People of The Way, as the earliest Christians called themselves.  But just saying how you live is important doesn't "hearken to Christianity's beginnings."  It was "Christianity's beginnings" because people lived The Way of Jesus and The Way of Jesus springs from believing in a God of love as Jesus showed us to love.

I believe that the way we live is more important than doctrine and there's a lot of doctrine that should be challenged.  But the subtitle of "With our Without God" is "Why the way we live is more important than what we believe" and, for me, that can't possibly be right because we live out what we believe.  I think that's what Jesus means with that Bread of Life thing.  Living isn't just behaving a certain way, it's putting into action what's in your heart and soul.  And for me, that's not doctrine, or a supernatural being, or bishops, popes or humanist visionaries, it's this power of love and grace, this power of spirit that connects us all to each other and all of creation.  I call that power God.  I also recognize that we all come to God in a variety of ways and we call God by many names.  By all means, use what language is meaningful for you, but for me - and I'm pretty sure I'm not alone - I come to a God called God and the way is Jesus.