One of the things I always appreciated about author Douglas Adams was his unique and distinct perspective.  And he was funny.  Not always in a side-splitting, laugh a minute way, but in that insightful, quirky way that makes you think.  He's best known for The Hitchhiker's Guide to the Galaxy, an enormous source of pop culture references and this observation about people being able to fly: "there is an art to flying, or rather a knack.  Its knack lies in learning to throw yourself at the ground and miss. … Clearly, it is this second part, the missing, that presents the difficulties."

Sure, that probably sounds silly.  At first.  But think about it for a moment.  If it were at all possible to throw yourself at the ground and miss, you would be airborne.  But your perspective would not have been looking to the sky and being in it, it would have been about looking to the ground and avoiding it.  It depends on which way you look.  And sometimes, a radical - maybe even outrageous at first - way of looking at something can be insightful.

So bear with me for a minute because, this week, I'm going to do that. We're going right back to the very beginning.  Well, almost.  It's the story of The Fall in Genesis 3.

The Fall.  That's what most Christian traditions call the story in Genesis when all is perfect until the devil, disguised as a snake, convinces Eve to eat the apple from the forbidden tree of knowledge.  Eve gives into the temptation and then seduces Adam into eating it, too, and before you know it, they're naked and ashamed and on their way out of the Garden of Eden.  It's the Original Sin, the one that establishes our guilty, sinful nature, the one that casts us out from the perfectness of Eden into, well, whatever this is.  The sin that makes the sacrifice of Jesus necessary.  And, of course, it's all the woman's fault.

But hang on a minute, that's not really the story.  That's the doctrine talking.  That's centuries of uniquely "Christian" interpretation and church teaching that emphasizes temptation, sin, guilt, fear and all those great things, not to mention the patriarchal society of the church founders.

Maybe it's time, like it has become so often, to revisit the story, not the interpretation.  What if The Fall wasn't a fall at all, but a leap?

The story doesn't make the snake the devil, for starters, nor is the snake evil, just crafty or cunning (and not necessarily in a bad way).  The snake makes a case for eating the fruit.  Eve considers it and makes a reasoned decision.  "She also gave some to her husband, who was with her, and he ate" (Gen. 3:6).  There's no seduction, no coercion.  Adam makes a choice, too.  And their choices bring them awareness.  It also brought them some fear, but was it fear that they'd done wrong or were they simply afraid and anxious in that way we all are when something is suddenly different and the future becomes unknown and unpredictable.

Those choices have consequences, but I can't help wondering if maybe God knew what was going on all along.  Maybe we'd always had freewill, but we needed to use it in a way that had consequences in order to grow.  And God wants us to grow. 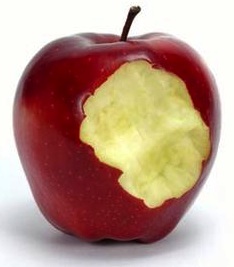 Eden wasn't "lost," it was left, maybe even out grown.  And this garden is one of our making, too.  We participate in this creation, freely, experiencing life.  And death.  And love and fear, temptation and grace, sorrow and joy.

So, have I given you something to think about or did I just throw myself at this story and miss?
Posted by RevRob at 23:08 No comments: