A moment, more or less 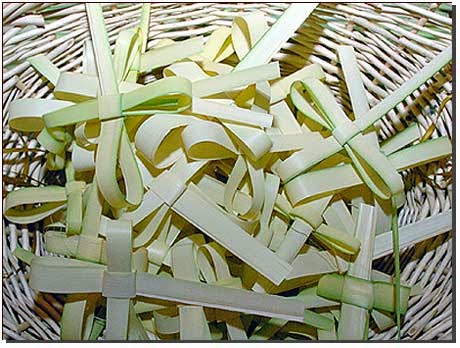 We'll be handing out palm crosses at our church on Palm Sunday this year.  I think the symbolism of the palm, that was waved in celebration to welcome the hero Jesus, fashioned into the cross, the means of his death when we turned on him, is a meaningful and thought provoking representation of that last week before Easter.

That's what I think this year.  That could change when I think about it next year or the years after.  And it should, right?  Sometimes we find meaning in things so we continue to do them (we call that tradition) and sometimes our thinking changes as relevancy changes.

I've always struggled a bit with Palm Sunday for that reason.  When I was younger, we had big long palm fronds, you know the kind that you can fan out or hold tight together (making them into "swords" was an important feature when you're a little boy).  Later I remember having the leafier ones that we were encouraged to wave as we walked around, pretending to celebrate Jesus' arrival in Jerusalem.  Once or twice, I remember going outside and walking round the block, waving palms branches and singing, celebrating that Jesus, the Messiah was here, just like they would have back then.  The neighbours probably thought we were crazy.  Maybe they were right.

That's my struggle.  We can't do it just like they did back then.  I don't mean just the palm branches that aren't native to where I live or the man on a donkey or even the presence of Jesus himself.  I don't mean the different context of how we'd welcome a messiah now or even what it would mean to be one.  I mean the moment.  We know what happens next in the story.  The people who welcomed Jesus that day, the people who accompanied Jesus that day, even the soldiers who stood by and watched Jesus that day, had no idea what was going to happen next.

We do.  Even as we tell this story of celebration and joy, we know that it turns into something very different over the next few days.  That's not a bad thing and I'll come to that in a minute.  But just right now, give me this moment.  Can we hold this moment and find meaning in it before we move on?

The people who celebrated Jesus that day had heard the stories about the miracles, how he fed people who were hungry and healed people who were sick.  They heard him talk about peace and the new kingdom and they'd heard him called the messiah, the promised one.  And that could mean only one thing: this was the guy to overthrow the Romans and restore Israel to its former glory.  After all, he was a son of the house of the great king David.  Their perception of Jesus was very practical, down to earth and in the moment.  That's what all the fuss was about.

But that raises a question: are we thankful and honouring our hero for what's been accomplished or are we really celebrating what we expect of them?

Let's first celebrate the man who has done so much, shared such compassion and love and comes, alone, humbly riding a donkey, a sign of peace.  Stop there for a moment and we might then be able to hear the message that he brings and see the transformative power of the way of life he teaches by his own example.

But we don't pause there nearly long enough, nearly often enough.  Perhaps if we did, we would find the strength to live that way and grow into a better life and better relationships with respect and hope.

Instead, we hear the fears of those who's power is threatened and their fears become our fears.  We see only weakness if our hero doesn't defend when attacked, let alone reply in kind.  We feel disappointment when flaws are exposed, very human failings appear and our expectations aren't met.  How often have we abandoned heroes who did meet our expectations or, worse, turned on them?

That's when knowing how the story proceeds can teach us.  The same faces that were in the crowd to welcome him were in the crowd that condemned him.  We are sometimes still that crowd, thinking that, somehow, disappointment, hurt and fear should be satisfied by punishment rather than compassion and understanding.

This journey from Palm Sunday to Easter is our journey, too.  Celebration, conflict, death and brokenness are all part of our living.  We begin with love, sometimes wandering far away from it, turning on it, even, when it disappoints us.  Yet love still returns to us.  When will we turn to love?
Posted by RevRob at 12:11 No comments: