Transfiguration Sunday’s the last Sunday in the season of Epiphany, the last Sunday before the season of Lent begins.  The story (Mark 9:2-9) goes something like this: Jesus takes Peter, James and John up to the top of a mountain where he appears to be transfigured, that is “his clothes became dazzling white” and Elijah and Moses appeared, talking to Jesus.  The disciples are suitably terrified and a voice is heard from a cloud saying “this is my Son, the Beloved; listen to him.”  On the way back down the mountain, Jesus tells them not to say anything about this until after he has risen from the dead, leaving the disciples to wonder what he means by that.

So this year, on Transfiguration Sunday, we’re receiving new members to our congregation.  Here’s my plan: with all the new members standing at the front, we’ll welcome them and then I’ll say “light’em up” and we’ll focus a 1200W spotlight on them in a blaze of glory, transfiguring them, and we’ll all give a good “hallelujah!”

And they’ll be members for about another two seconds.

I’m just kidding, of course.  Mostly.  People, generally, don’t like being put in the spotlight in church, especially not for just being themselves.  Oh, maybe for a play or a little liturgical drama or a reading, but certainly not in an unexpected moment that might expose who they really are.

You see where I’m going with this, I think. 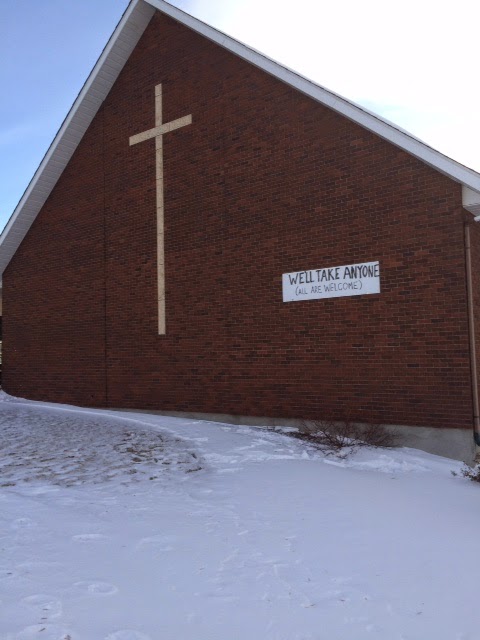 This season of Epiphany, my theme has been to wonder at more than just how Jesus is revealed in these stories, but how the story speaks to Jesus being revealed in us. The arrival of the magi who followed the star should remind us that Jesus is for all.  The magi were probably foreigners, after all, a different faith, a different culture, but believers none the less.  Thanks to this story, our church has a big handmade sign on the outside of it that says “we’ll take anybody.”  After all, Jesus did.

Then we heard the story of the baptism of Jesus, the story that mirrors the Transfiguration story, with it’s moment of revelation including a voice saying “this is my beloved in whom I am pleased.”  We, too, are beloved by God, all of us, we are known (in our heart of hearts) by God.  The stories continue with Jesus inviting the first disciples to follow him, fishermen who would learn to “fish for people.”  So Jesus calls us to follow, not by being different, but by being more of who we are.  Then Jesus begins to teach about love and heal people of their demons and their illnesses.  Jesus makes people whole, whole with themselves and with their community and with all of creation.  Jesus is revealed in us as we follow The Way Jesus teaches, seeking that wholeness.

And so here we are at Transfiguration: a vision of Jesus shining with glory, standing with Elijah and Moses, revealed not only by appearance but by that voice again: “this is my beloved.”

There is much to study in this story and its context in Mark’s gospel, but just now I’m concerned with the big picture and it’s context where we put it.  Look at it for a moment as the story that rounds out Epiphany.  It’s almost like a bookend to that baptism story, but it feels a little less like Jesus is revealed as Jesus is exposed, even to the point that Jesus tells the disciples not to say anything yet, not until after other things have happened.

I wonder if we don’t find ourselves feeling that way.  Nobody likes to be exposed; it has such a negative connotation.  Being exposed is tricky because it requires that we let ourselves be vulnerable.  But it’s precisely what Jesus did in his ministry: he made himself vulnerable healing the sick, spending time with outcasts, eating with sinners.  He made himself vulnerable in loving, that we might learn to love.  Jesus’ moment of transfiguration was lived out - mountain top experiences and the lowest of valleys - in the days that followed: revealed and lived out.

Jesus is baptized by John and then led (or driven, according to Mark) into the wilderness by the Spirit.  I wonder if Jesus, revealed in baptism, then went into the wilderness to figure out what he was going to do with that, with who he knew himself to be.  I think one seeks out wilderness experiences to do that, to figure out what you’re going to do with your life and I wonder if Jesus, taking full advantage of his humanity, wasn’t doing just that.  The testing (the most original texts we have use a word that could mean tempted or tested) Jesus experiences there reveals the strength of his awareness and the will of his spirit to live out the life he does.  He is not deterred from his true self.

Lent, then becomes the next step in our journey towards Easter.  Having examined how Jesus is revealed in us during Epiphany, we can now spend time “in the wilderness” envisioning ways that we may put that into practice.  We will be tested and even tempted, perhaps, to go a different way.  We will most certainly find our vulnerability challenged and want to protect ourselves.  But living true to ourselves, knowing how Jesus is revealed in us and how that brings life to our living, we can envision a way forward through the wilderness.
Posted by RevRob at 22:02 No comments: